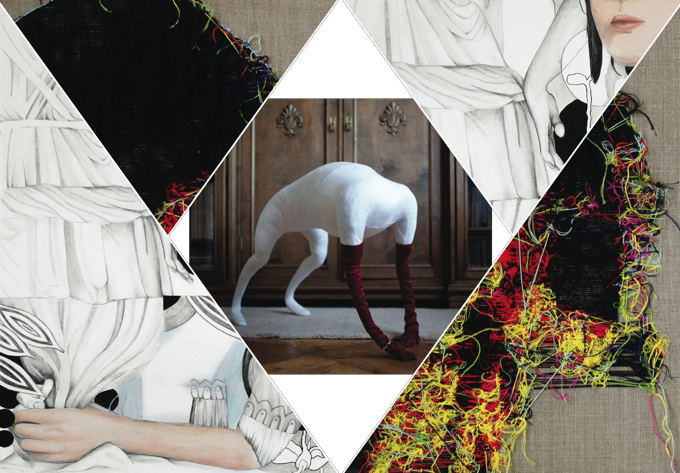 In the exhibition Treading In The Steps Of Power And Powerlessness the artists Saana Inari, Angela Kaisers and Constanze Thielecke explore and question varied structures of power in the context of daily experiences, historical impact and through the interaction of their work on-site.

Saana Inari works with installations and sculptures, video and media art, animation, performance, and photography – often combining several techniques simultaneously.
In her sculpture series Morph2 Saana continues exploring human encounters and relations with other animals.
An old Finnish saying goes: child’s will is in the parents pocket. These days pet animals are treated the same as human children. In which position we think we place an animal inside the society – and where are they actually standing? No matter what, they will be looked at from above. The constellation of passive and active roles in all kind of partnerships – in fiction and real life – is the focus point of Angela Kaisers‘ recent artworks for which she adopts the highly charged technique of handmade embroidery.
In her series The Cause. The Mood. The Situation. The Blur. she investigates the passive states of waiting, i.e. waiting for someone, something or an event to happen, to a personal level and explores such moments in her own life, utilizing selfportraits from her vast photographic collection which capture her in situations of waiting and anticipation. In I, I Will Be King. And You, You Will Be Queen. Angela challenges constellations of power and powerlessness and our subjective ways of perceiving these structures, selecting familiar photographs of well-known “couples” found online, emphasizing – but also questioning – the power structure they are associated with.
For the exhibition Treading in the Steps of Power and Powerlessness Angela interweaves works form both embroidery series to create new dialogues and relations of power not only within the works but between herself and the depicted scenarios as well. Angela Kaisers: I, I Will Be King. And You, You Will Be Queen (Sean Connery as James Bond & Bond Girl), Embroidery / cotton on linen, 2017

In her artwork Constanze Thielecke often combines historical, contemporary and mythical settings and figures, adding a contemporary twist by placing those in new imaginary relations to each other to explore questions about social relations.
In her new series Among Gods and Mortals Constanze shows drawings of greek goddesses among contemporary women, combining historical sculptures and imaginary figures in double portraits. Oscillating between abstract and figurative forms, through drawing Constanze explores various states of power and powerlessness of those figures through the (often one-sided) way of reading their stories and their depiction in sculpture.
Starting with specific godesses, Constanze undertakes a more extensive research into the need for identification and symbolization. In her double portraits the relationship between imaginary and sculptural figure suggests tension and its dissolve, interchanging stiffening roles towards an ambiguity of the goddess and her various story lines.

Constanze Thielecke
Among Gods and Mortals – Embodiments of Power and Powerlessness. (2017)
www.constanzethielecke.com