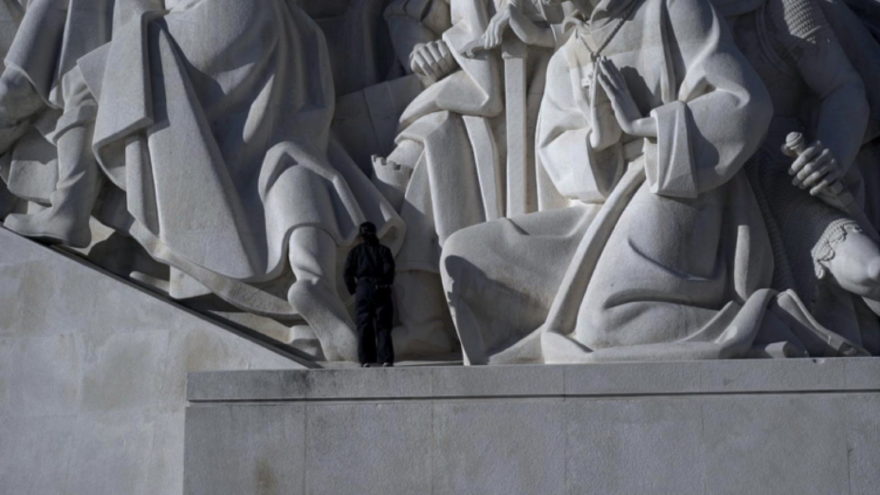 Taiga Trigo
What would a decolonized Lisbon sound like?
Video

“What would a decolonized Lisbon Sound like?”, in this particular format, is an audiovisual testimony of 6 sound interventions in public spaces, that took place in Lisbon in the beginning of December 2020.

As suggested in the title, this sound-art work is anti-racist, postcolonial and utopic in nature.

These interventions were NOT enacted to affect passerby’s, stir up a reaction in local authorities, or even to constitute a documentary with which to sensitize white Portuguese masses on the, still to this day denied, every-day racism and structural racism prevalent in this country, or its relation to the glorification of sites iconic to Portuguese colonialism.

Instead, this project enacted a “gesture”, of symbolic nature, in support of the voices of Lisbon-based agents of the anti-racism movement.

All interventions are vocal recordings, created by those who voice them as a response to the question “what would a decolonized Lisbon sound like?” specifically spoken with the site they would “occupy” in mind. For the sake of the audiovisual object here, the sound identity of these „colonialism-charged“ spaces is revealed before this sonorous „silencing“ is disrupted by the vocalizations.

This project was a collaborative effort with Naky Gaglo, (founder of the African Lisbon Tour and real estate Agent), Carla Fernandes (founder of AfroLis, radioblog and community), Selma Uamusse (Singer), Nuna (actress, screenwriter, playwright), Isabel Taunay (producer and sound-recordist) and Joyce Newzrella (videographer). It belongs to them and what will happen to it is up to them.

It is also relevant to add that, behind this work, was also an interest in understanding how privilege (particularly white privilege) and power can be used as a tool and as a platform to re-balance or redistribute that same power and privilege. Questioning also the ways in which sound-art can take part in political action. And it was informed by the writings of Audrey Lord, particularly the 1977 text “The Transformation of Silence into Language and Action”, the book “Plantation Memories”(2010) by Grada Kilomba and the work and book “Black Imagination” by Natasha Marin (2020)